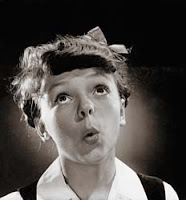 I like to whistle and am becoming concerned that it is dying out.  I was once stopped by my headmistress and ticked off for whistling. She intoned humourlessly (her only setting) "a whistling woman and a crowing hen are neither fit for God nor men", which made me hate her, and love whistling, even more.

I am indebted to a person called Linda Hamilton for lots of information about whistling. She delivered a lecture on the history of musical whistling (as opposed to signal whistling) at the 2012 International Whistling Convention in North Carolina and some helpful person filmed it and posted it on YouTube. (If you have half an hour to spare, do seek it out. It is noteworthy in many ways.) Passing lightly through ancient civilizations, the Bible and Pepys, she arrived at the 1880s - the beginning of the Golden Age, one might say (she didn't). Now - here's the thing. There were many vaudeville whistlers (or sometimes whistlists) and women were well-represented among their ranks. Alice Shaw (1853-1913) used to whistle with her twin daughters

and Agnes Woodward (1873-1938) wrote a whistling manual and set up The California School of Artistic Whistling. 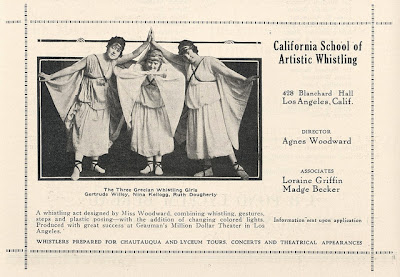 The School had an all-women touring performance group, with their own bus. So stick that in your pipe and smoke it, Sister VC!

There used to be a radio programme called My Music, chaired by Steve Race with a regular panel of Frank Muir, Dennis Nordern, Ian Wallace and John Amis. Presumably the first bit was some sort of quiz - all I remember is the second part of the programme where all the panellists did a turn. John Amis would often whistle, and it was from him that I first heard the terms siffleur and siffleuse. I don't remember any of his his whistled pieces, and it might be that he didn't whistle very often other than in my memory, but there we go. The only turn I remember any of them doing was from Mr Amis though - he sang, unaccompanied,  I Wonder As I Wander and I was thrilled to my bones. He sang the first three lines, which apparently were originally heard, sung by an Applachian child in 1933, by John Jacob Niles and put into a longer carol. Here's a version by Julie Andrews. She sings "simple" instead of "orn'ry", but I won't hold it against her.

Anyhoo, back to whistling. There's lots to it, apparently. Did you know that Al Jolson was a noted finger-whistler? Me neither. But here he is, looking very unconvincing. I enjoyed the expression of the young lady very much.

I was very fond of I Was Kaiser Bill's Batman by Whistling Jack Smith - whoever he was. There seems to be a general agreement that the person who appeared as WJS, one Billy Moeller, didn't do the whistling, but diverging opinions about who did, with one particularly overexcited claim being the Mike Sammes Singers. There is a two-part section, but I hardly think all of them would have been required, unless it was a relay.

Then there was Roger Whittaker, of course, with his Mexican Whistler. Here is a very peculiar video of him. Where is he? And why? Ace whistling though.

And then there's Sweet Georgia Brown, (Sittin' On) The Dock of the Bay, The Whistling Waltz and many others - but where have all the siffleuses gone? Answers please!

Thanks for popping in - the salon is now open for comments, whistling-related or not. If it's your first time, do say hello.